It’s vitally important to remove dryer vent screens in order to prevent dryer fires from occurring. These screens should be removed during home inspections. If this is not done the airflow to the dryer will be restricted and will cause issues with your clothes dryer and can ultimately lead to dryer fires. Below you can find an educational video, where our CEO Brandon will discuss the importance of removing dryer vent screens in order to promote safety and efficiency. 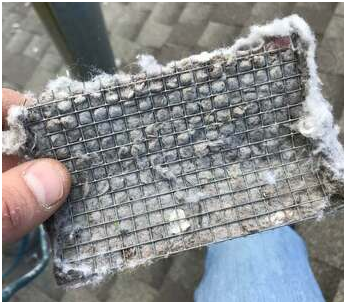 Remove The Screen From Dryer Vent

If there are screens are in your dryer vent, this is because your home builder forgot to remove them. These are perfectly okay to have in a different kind of vent like a bathroom fan vent but not good for a dryer vent. That vent is where all the lint is escaping. If a dryer vent screen is present in the system the lint will not be able to escape. After a short period of time of collecting their it will create a blockage. Below you can find a list of a few reasons why this is bad.

Keep Pests Out Can Increase The Risk of a Dryer Fire?

Some people put screens over the end cap of their dryer vent to prevent birds or critters from moving in. Whilst this may seem to make sense, the truth is it is not the best of decisions as once the vent gets plugged at the end the lint has no where else to go. Just like cholesterol it builds up over time and starts to restrict the airflow thus lint starts to accumulate inside the dryer itself. Lint starts to settle inside the dryer cabinet and on or around the dryers heating element.

Dryer Fires Start Inside The Dryer

So the screen on the end of the dryer vent caused a lint plug, this then causes the lint to accumulate more through the dryer vent and inside the dryer. The lint inside the dryer is what causes dryer fires, the heating element glows red and reaches temperatures as high as 190 degrees fahrenheit all it needs is for a clump of lint to sit on the element and you can have a dryer fire on your hands.

Tips to Extend Your Dryer’s Life

Reasons Why Your Dryer Takes Too Long to Dry Clothes